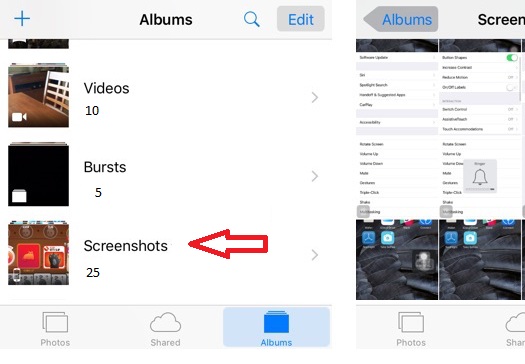 How to take a screenshot on iPhone or iPad. Before we get started, we think it is an excellent idea to start by defining what a screenshot is and how this works in order to understand the text better. We can define screenshot as a digital image of anything we can see on a screen, especially if we are talking about a desktop computer or a TV. It can be created by a large amount of operating systems, but also by programs who run on your devices. It is also possible to create a screenshot by taking a picture of the screen.

These interesting images were created when the interactive desktops were launch in the sixties, which is something very important to consider. It is also very important to mention that operating systems from computers are not ready to capture screenshots, which means that they were being adapted for the new times.

At present, it possible to capture screenshots on computers and mobile devices too. In this sense, we are going to explain how to take a screenshot on iPhone or iPad.

In case you have an iPhone X or later, you will be required to look for the Hide button to start with the process. Then, you have to press and hold it for some seconds. In case you cannot find the button, you have to go to the right side of the device in order to locate it. After doing this, you need to tap on the Volume up button, which can be found on the left side of the device. Now, you need to release both buttons to continue.

After releasing both buttons as we say, you will be capable of seeing a thumbnail of the screenshot you have taken. It is important to take into account that you have to locate it in the left side of your device. Once you have located it, you are required to click on it in order to add any drawing o text you want. If you do not want to do this, you have the option of pressing and holding the thumbnail in order to share it with other users.

How you can take a screenshot on iPhone 8 or earlier

This process is very similar to the previous one. Firstly, you have to go to the Side button and press it. Then, you need to find the Home button and release the Side one. When the thumbnail appears, you have the possibility od adding drawings and text as you want. If this is not the case, just press it to share.

Take a screenshot on iPhone 6s

The steps to take a screenshot are very easy to do:

You can take a screenshot by pressing the sleep / activation button first, and the start button second. Method recommended by Apple, but pressing both buttons at the same time is more practical.
If you have done well by pressing both buttons, the screen will briefly flash white and you will hear the sound of the camera’s shutter. Your screenshot will be automatically saved in the album screenshots in the Photos application.

How to Delete Photos From an iPhone

How to Send email attachment on iPhone